Throughout years of work ENSP focused its effort on ensuring that the WHO Framework Convention on Tobacco Control was signed, ratified and implemented by all European countries. In particular ENSP concentrated on FCTC Article 14 to promote measures on tobacco dependence and cessation. Furthermore, since 2018 ENSP organises tobacco treatment specialists’ trainings and specific country Support Visits providing expertise on tobacco dependence treatment and advice on creation and improvement of national cessation programmes. ENSP is striving to ensure the topic is not lost among many tobacco control priorities both on national and European level.

European Network for Smoking and Tobacco Prevention submits the following resolution to the European Parliament:

Resolution about Article 14 of the World Health Organization Framework Convention on Tobacco Control (WHO FCTC) which requires effective measures to promote cessation of tobacco use and adequate treatment for tobacco dependence.

A. whereas tobacco smoke is a complex toxic mixture of more than 4 000 substances, including poisons such as hydrogen cyanide, ammonia and carbon monoxide, as well as 50 substances proven to be carcinogenic,

B. whereas tobacco use is the leading cause of premature death and disability and the largest threat to public health for the European population,

C. whereas each year, 700,000 Europeans die from tobacco-related illness while approximately 50% of tobacco users die prematurely,resulting in the loss of an average of 14 years of life,

D. whereas the European region has one of the highest proportions of death attributable to tobacco, (16% of all deaths among adults over 30 years old),

E. whereas more than 125 million Europeans (26%) continue to smoke. This is the highest rate of tobacco use among all the WHO regions while Southern Europeans smoke more on the contrary with the Northern Europeans where people have stopped smoking in a greater percentage,

F. whereas it is known that tobacco consumption costs European economies hundreds of billions annually,

G. whereas exposure to smoking during pregnancy can result in a higher risk of deformities, miscarriages, still and premature births, stunted growth of the foetus, smaller head circumference and a lower birth weight and there is a link between passive smoking and middle ear infections, impaired lung function, asthma and sudden infant death syndrome,

H. whereas the European Union and all 28 Member States have already signed and ratified the WHO Framework Convention on Tobacco Control (FCTC) and Article 14 which highlights the demand for reduction measures concerning tobacco dependence and cessation,

I. whereas the majority of smokers in Europe have tried to quit (52%), but the vast majority of them (75%) tried to quit without assistance and only 5% used medical support or other services to help stop smoking,

J. whereas cessation interventions have a more mid-term impact on the number of deaths and therefore must be encouraged. World Bank report explains that, if smoking initiation is reduced by 50% by 2020, the number of deaths from tobacco will decrease from 520 to around 500 million in 2050. On the other hand,

L. whereas tobacco users who seek help from a healthcare professional are up to four times more likely to successfully quit than those who try unassisted,

N. whereas the combination of behavioral counseling and pharmacotherapy is the key component of successful tobacco treatment,

P. whereas a combination of behavioral support and pharmacotherapy can increase abstinence rates fourfold,

Q. whereas quitting smoking the excess risk of smoking-related coronary heart disease is reduced by approximately 50% within 1 year, and to normal levels within 5 years,

YOUTH CONTEST: ENSP Next – Towards a tobacco free generation

CONTEST DETAILS 1. PARTICIPATE We are happy to invite young individuals, members of youth and student associations and youth advocacy groups from the WHO European region to participate in...

ENSP-ECTC Conference is suspended until 2021

Due to ongoing uncertainty surrounding the coronavirus pandemic and the disruption to travel and social gatherings into 2020, the ENSP Board has decided to suspend the 5th ENSP-ECTC Conference, that... 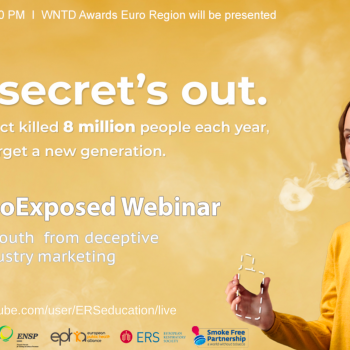